Volleyball has been a part of Mike’s life since he was a 16-year-old high school student in gym class.  In 1981, while at the College of the Virgin Islands, Hodge tried out for the team and became a member of the CVI Buccaneers Volleyball program.  Under the coaching and tutelage of Elridge Blake, to whom he owes his dedication and development in the sport, volleyball became engrained in Hodge's blood. During his time with this team, the Buccaneers won several V.I. Adult Power League Championships.  In addition he traveled throughout the Caribbean and Canada, playing in numerous tournaments.  It was during that phase of his career and beyond that he played on the Virgin Islands National Team.

In 2000, after knee surgery, he founded the International Jammers Volleyball Club Team.  Without all of the key components to have a dominant men’s team, he put his volleyball playing dream aside and played for two years with Vaughn Hastings's teams.  In the 2003/2004 season with Doug Acksel and Blaine Tendler as administrators, he re-established the International Jammers Men Teams.  With the Jammers representing 10 different nationalities, Hodge played until the 2006/2007 season before he officially retired for competition.  Mike also played outdoor triples and quads in addition to playing in the Chapel Hill City Leagues, Durham City Leagues, and RTP competitive leagues.

In 2003, Mike became a member of the Riverside High School Volleyball team staff as an assistant coach, and in 2006 he became their head coach. After coaching with the Chapel Hill Spikers for the 2003/2004 season, Mike co-founded the Junior Jammers Volleyball Club during the 2004/2005 club season with Blaine Tendler where they were coaches at Riverside High School. Mike's first team won 20 matches in a row to start their seasons before suffering their first loss.

Mike has coached ages 13’s thru 18’s during his tenure with Jammers Volleyball Club.  Continuing to coach high school volleyball, Mike has been honored as the Coach of the Year for the PAC 6 during the 2010, 2011 and 2013.  His record at Riverside High School over the last five years is 101-25.  He was also awarded the 2010 Meritorious Award for his contributions to improve the level of play in the Durham/Chapel Hill area.  After a year off from coaching for personal reasons, he is back in the trenches to coach the 17’s age group.  Coach Hodge considered himself to be a Jammer for Life!!

He resides in Durham with his wife Dr. Carmen D. Samuel-Hodge and son Michael Samuel Hodge.  He also has a daughter Megan Colleen Hodge who recently got married and lives in Massachusetts with her husband Omar X Easy and son Easton Xavier Easy.

Side Bar:  In 2005, Hodge was diagnosed with prostate cancer and in 2012 his wife was diagnosed with breast cancer hence forth the Yellow Live Strong Jerseys and the pink Jammers t-shirt “Playing for the Cure” on my Face Book page. Through it all volleyball has been a stabilizing force. 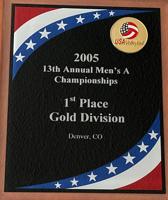